Place and date of death: shot by Arab terrorists in Rafiah-Yam hothouses, 14.1.2001 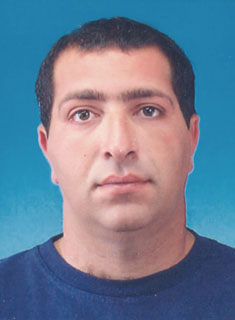 Roni was born in Israel (1970), son to Nava and Naim Tzelach, and brother to Moshe and Moti. He attended the Ramat-Gan State School Geulim in and Tel-Aviv’s “New High-school.” Roni was characterized as early as his youth for his love of bike-riding; he’d go on long rides with his friends exploring the width and length of the Land.

After his release from the army he moved to Gush Katif and resided in Kfar Yam. He worked in Atzmona in agriculture, in the potato branch.

Roni married Oshrit and the couple was blessed with their first son, Gal.

Roni was known for his good temperament. One could see his faith in men, and he’d constantly be smiling and in a peaceful frame of mind. Roni was loved and sought after; people wanted his company. He was a quiet man, kind to all – Jews and Arabs alike. During political discussions he’d always keep silent, a deafening silence. His calm, confident look was all he needed to restore peace.

On Sunday, January 14th, 2001 Roni was attacked by 3 Arab terrorists in his hothouses. The investigation revealed that the terrorists wanted to kidnap him to Gaza, and then, presumably, negotiate for his release. He struggled, and then after a short drive of some 200 meters, they realized they wouldn’t be able to kidnap him. During an additional struggle in a nearby onion patch they shot and killed him.

Roni was 30 at the time of his death. He was brought to burial at the Gush Katif cemetery. He was survived by his parents, two brothers, his pregnant wife and a son. His daughter, born seven months after his death, is named after him: Liron. Many friends and relatives came to mourn for him: from army, from work. Among what they wrote about him: “you were a leader for youngsters and adults, you couldn’t harm anyone, your good midos are of value to us all, and are engraved in our heart – a person who laughs, who cares…quiet and sees to the depths of each soul.”

After his death, the family discovered that Roni used to secretly help needy people and Yeshivas.