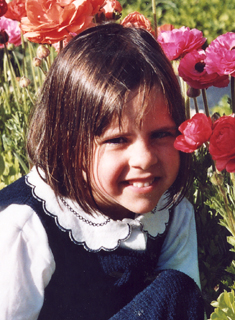 Roni Sarah was born in Ashkelon, a third duaghter to Tali and David Hatuel, a sister to Hila Esther, Hadar Simcha and Merav Rachel. She was raised in the community of Katif, in Gush Katif and attended the Atzmona elementary school for girls.

Roni was a pure child. Her teachers tell how in morning Shachrit prayers in class, she would concentrate deeply in prayer. The Sages say that the innocent prayers of children reach the Throne of Glory.

Roni was 6½ years old at the time of her death. She was brought to burial in the Ashkelon cemetery alongside her mother and three sisters.

“Roni – songs, joy of life, a smile to everyone, love and care of all… Guiding a girl in first grade means raising her, teaching her, educating her. Knowing when to give a hug and a kiss…Roni and I walked hand-in-hand, teacher and Roni. I taught and educated and loved and she listened and loved me back. She’s just a little girl – and has already become a legend.”