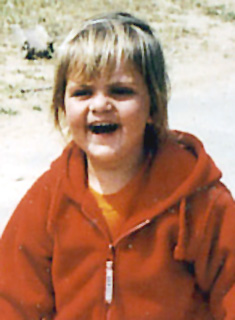 Merav Rachel was born in Ashkelon, a fourth child to Tali and David Hatuel, a younger sister to Hila Esther, Hadar Simcha and Roni Sarah. She was raised in the community of Katif, in Gush Katif.

Young Merav was like a flower, she was so pretty and full of life. She liked to sing and dance and imitate the nursery teacher – “playing” at being an adult. She’d help her mother and curl up in her father’s arms.

Merav was 2½ years old at the time of her death. She was buried in the Ashkelon cemetery alongside her mother and three sisters.

“Merav – ‘many waters’, charming and energetic… in the morning you’d arrive at the nursery early, full of joy… you loved singing and dancing, playing with the musical instruments. That’s how we’ll remember you, sweet Merav, innocent and charming, energetic and joyful.”