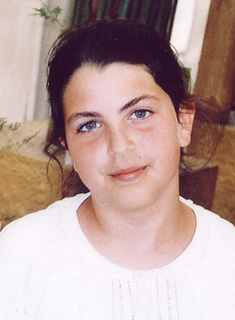 Hila Esther, was born in Ashkelon, to Tali and David Hatuel. She was their eldest child, and following her were born Hadar Simcha, Roni Sarah and Merav Rachel. She was raised in the community of Katif in Gush Katif, and educated at the Atzmona elementary school for girls. Hila had a great natural curiosity which made her question, discover, and try to find things out, and understand and learn. She was a pretty girl, creative and mature for her age, full of life and always smiling. She showed her gratitude for small favors, and didn’t think ill of others. Her sensitive nature enabled her to make peace among her friends, who loved her dearly.

Hila was 10 years old at the time of her death. She was buried in the Ashkelon cemetery next to her mother and three sisters.

“Hila was enveloped in light; modest and shy…the classrooms misses you. Your empty seat cries out for you. But know, Hila, that your place is etched in our hearts. We’ve tried, since you left us, to promote your plans and imitate your virtues, and feel that you are still with us. Your special sensitivity, your bright face, manners, gratefulness, endurance even when things were hard…”.