Survived by:  her father 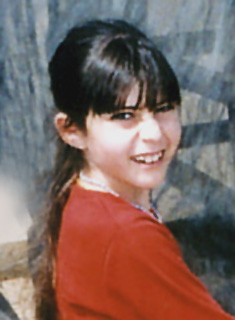 Hadar was born in Ashkelon to David and Tali Hatuel. She was her parents’ second daughter, a sister for Hila Esther, Roni Sarah and Merav Rachel. She was raised in the Katif community in Gush Katif and attended the Atzmona elementary school for girls.

Hadar was smart and capable of great self-restraint. She was industrious and loved helping others. Her friends found her a source of strength and encouragement, and she was a positive example in her behavior.

Hadar was 9 years old at the time of her death. She was buried in the Ashkelon cemetery next to her mother and three sisters.

In a booklet published in the Hatuel’s memory by the Gush Katif regional council and the Atzmona school where 3 of the girls learned, it was written about Hadar:

“Hadar – you were glorious and splendid, a unique type of nobleness, pleasant and charming in your ways. Our Hadar loved learning, and especially loved learning Torah, the prophets and other religious subjects. She successfully completed every learning task, and did so happily. She kept her books and notebooks neat and in order. She prayed with feeling and kavana, and loved saying Psalms. Hadar, your whole entity wished to elevate G-d’s name….”