Killed during an army operation in the Gaza Strip 26.3.2010. Served as the Deputy Commander in the Golani brigade, in the Barak unit (32 yrs old)

.
Brought to burial at the Mt. Herzl military cemetery, Jerusalem.

Survived by his mother, 2 brothers, 2 sisters, wife and 4 children. 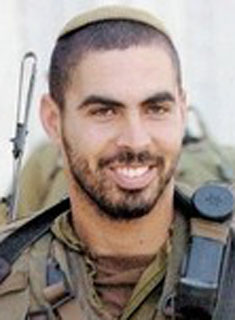 Born to Miriam and Eliezer, bereaved parents who lost their older son Uriel OBM. After him were born to the Peretz family Eliraz, Hadas, Avichai, Eliasaf and Bat-El. Eliraz was born in Sharm El-Shekh. His childhood was spent there in the wild desert and sea, and that’s when he learned to love nature, field trips and especially the sea.
In 1982 Israel signed a Peace agreement with Egypt and the Peretz family moved to Givat Ze’ev near Jerusalem, and Eliraz started his schooling there. After completing his schooling at the Himelpharb high-school in Jerusalem, he decided to postpone his enlistment to the IDF and study at the Otzem pre-military academy in Atzmona, Gush Katif. During this period, his personality grew and was enriched both spiritually and from a military point of view.
Eliraz was a loving child, who embraced others, and desired a meaningful life. Every hour of his life was devoted to the nation.
His friend Yehuda Ish-Shalom eulogized him: “the heavens weep for you, the little prince has died, the angel has left the land, cry beloved county, today you receive this precious man to your lap.”

In 1998, after completing his studies at the Otzem pre-military academy, Eliraz enlisted to the IDF to the Golani combat brigade. Several months after his enlistment, his brother Uriel was killed in Lebanon. Standing over his brother’s grave, Eliraz promised to walk in his brother’s footsteps – and went on a commander’s course. He fulfilled the following tasks, among others: platoon commander, company commander, deputy battalion 12 commander.
The brigadier commander said about Eliraz OBM: “Eliraz didn’t know fear, and always had a smile on his face.”
Eliraz started a family and had four children: Or Chadash, Halel Miriam, Shir and Gili Bat-Ami who won’t get to know her father.
On 26.3.2010 Eliraz fell during a military operation in the Gaza Strip. He was leading his soldiers, and they were surprised by a group of terrorists who fired at them at short range. A bullet hit the grenade in Eliraz’s vest and it exploded. As a result, Eliraz, and sergeant Ilan Saviatovski were killed and two soldiers injured. Eliraz was brought to burial at the Mt. Herzl military cemetery, Jerusalem. Survived by his mother, 2 brothers, 2 sisters, wife and 4 children.