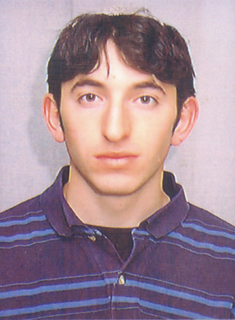 Asher was born and raised in Jerusalem, a brother to Amos Zecharia and Ariel Betzalel. He attended the Mimon elementary school in Kiriat Moshe and then the Himelpharb religious high-school in Beit VeGan. In his childhood he was mischievous and restless, but as he matured he grew more serious – without losing his joy of life. He loved playing and hanging out with friends, yet he greatly desired to increase his knowledge. From a young age he was attracted to subjects which required a developed memory, such as history and mathematics.
Asher participated in the Bnei Akiva youth group, and at the end of 10th grade was a councilor for the Nitzanim branch. He was very dedicated, and gave of his time and energy. Asher always smiled, and was always sensitive to the mood of the members of his youth group; they had his full support, even as they grew older. Asher was very happy at the Himelpharb high-school: “the educational method of the place matched his own and left its sign on him forever” (the family). Some two weeks before his death, as an academy student, he wrote to his friend Ariel: “I want to tell you that I haven’t discarded what I’ve received from Himelpharb…”.
During high-school he traveled to Poland and the extermination camps in Auschwitz-Birkenau. In front of the destroyed ovens he read a number of poems his grandmother had written when she was a prisoner in the camp. Many of his classmates considered his emotional reading to be the high point of their visit. On the 30th of Asher’s death, his principal Rabbi Yermi Steviski, said that at those moments (of Asher’s reading) he’d felt that Asher was exemplifying what is meant by Netzach Yisrael, his being a link in the history of the Jewish nation.

After graduating high-school, Asher chose to study at the religious pre-military academy in Atzmona, Gush Katif. He longed for religious studies. His study partner, Yair, later described him as “a talmid chacham, great and modest, always willing to help.” In the last months of his life, his Torah studies became something he lived. Asher wrote of this in a letter to a friend: “one thing that’s changed in me – I think before everything I do… since I came here, I’ve received more answers, why I do what I do.”

On Thursday night, March 7, 2002, a group of Hamas terrorists infiltrated the southern part of Gush Katif. As they advanced, they threw hand grenades and fired from their guns. Some 30 were injured from their gunfire and 5 academy students were killed, including Asher. He was shot and killed while studying Torah.
Asher was 18 when killed. He was survived by his parents and siblings. He was brought to rest at the Givat Shaul cemetery in Jerusalem, in the Kehilot Yerushalayim section.
His friend Ohad eulogized him: “It’s very important we all know that in this world you were, for us, a ‘gift’ for 18 years. Your life didn’t divide into elementary, high-school and academy, because your life was one whole, complete, that created such a wonderful person.”