Survived by: Parents, a wife, four children, two sisters and one brother 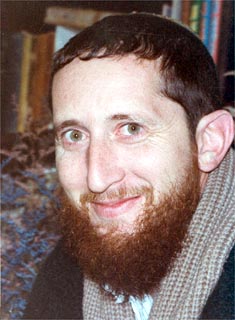 Shimon Tzvi, the son of Pinchas (Paul) and Chana Birnbaum, was born on December 9th, 1960 in Newcastle, England, the youngest of four children. His spent his early years in Newcastle until the family moved to Golder’s Green, London, as they sought a more Jewish environment.

In 1970 the family made aliya to Israel and at first, nine year old Shimon faced difficulties in his new school. After three months he acquired language skills and began to do well. In fact, at his high school yeshiva he excelled in his studies and simultaneously developed social skills. He organized many social events and devoted his free time to activities with the Bnei Akiva youth movement, initially as a member and later as a counselor.

Following high-school, Shimon elected to study at the Hesder Yeshiva program (a blend of Torah and army service) at Kibbutz Sha’alavim, in the Ayalon Valley. During this time he immersed himself in his Torah studies with enjoyment and enthusiasm. He fought and was wounded in “Operation Peace for the Galilee” – the 1982 Lebanon War. After his recovery, he returned to university studies while devoting some of his time to community activities, such as serving as an informal youth counselor and working for the benefit of immigrants and for those barred from immigrating.

Shimon was accepted to dental school after an extended series of exams. After debating the matter with himself he finally decided to devote his life to education. After completing educational studies, he began studying for ordination into the rabbinate.

In 1984 he married Michal Yedidi, and at this time changed his last name from Birnbaum to Biran. The young couple lived happily and modestly in the married student housing of the yeshiva. During the following five years Shimon was tested for all of the exams for ordination to the rabbinate and after completing them in 1989 the family moved to Kfar Darom, Gush Katif. Shimon was appointed rabbi of the community. The couple’s four children, Ateret, Gidon, Uri and Etiel were born to them during this time.

In addition to his role as Kfar Darom community rabbi, Rabbi Biran also worked at the Torah and Land Institute and conducted research studies on Torah commandments pertaining specifically to the land of Israel. His articles were published in the Torah and Land Institute’s publications and by others. He participated in developing methods for growing insect-free lettuce, was a member of “Midreshet HaTorah v’HaAretz” and traveled a lecture circuit explaining Torah commandments dependent on being in the Land of Israel.

As the rabbi of Kfar Darom, Rabbi Biran was involved in every level of the small community’s life. Kfar Darom residents consulted him on various subjects: pre-school education, the ceremony marking Israel’s Independence Day, financial disputes between neighbors and also day-to-day Halachic questions. As rabbi of a new community it was his task to establish religious rulings for local customs, such as saying “yizkor” on Yom Kippur in memory of the members of the original Kfar Darom Kibbutz who died in Israel’s Independence War of 1948. He kept a close watch on the construction of the mikveh and participated in the community forums determining the local customs.

The combination of his post as rabbi of Kfar Darom along with his work at the Torah and Land Institute provided Rav Biran with great happiness and satisfaction.

On the 27th of May, 1992 at eight o’clock in the morning Rav Biran walked from his home in Kfar Darom to his work at the Torah and Land Institute across the street, opposite the community gate. As he crossed the street a terrorist jumped out and stabbed him to death. Rav Biran was 31 years old at the time of his death. He was laid to rest at the Neve Dekalim Cemetery in Gush Katif.