Date of Birth: 31.1.1950
Place of residence: Katif
Place and date of death: run over in a terror attack at the entrance to Gush Katif, 30.11.1989
Place of burial: Har Menuchot Cemetary, Jerusalem
Age at time of death: 39
Survived by: a wife, children, a brother and sister 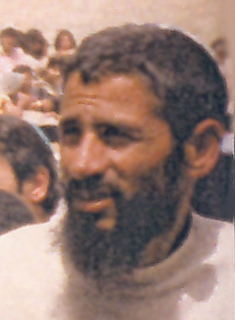 Avigdor was born in Tel-Aviv; a younger brother to Yafah. Following him, his parents were blessed with an additional son, Sraya. Avigdor lived at home until the age of 14 when he moved to Kibbutz Galil-Yam where he remained until the age of 18.
Avigdor enlisted to the IDF and served in the military police, and fought in the Yom Kippur war in the Suetz Cannel area. After the war, he turned to vegetarian and vegan studies as well as Jewish studies, and carved out a very special life for himself.
Avigdor married Sylvia and together they strengthened their Jewish observance. They lived in Gush Katif as early as 1982. The couple had 6 charming children, and they spent time considering how best to raise them. Avigdor successfully managed various flower hothouses in Katif, as well as other agriculture.
He was a pleasant person, loved by his family, friends and neighbors. Even the Arab workers who knew him respected him greatly. Avigdor would drive his workers to their work place and return them home. He was a quiet, modest man, with a bewitching smile. He would constantly say “a man should always be happy.”

After a few years, he decided to manage an eatery near the Katif check-out. Thursday, November 30th, 1989 Avigdor had finished work and closed the eatery when a soldier asked him to please make him something to eat. Avigdor didn’t hesitate, and fulfilled the request. He crossed the road by Han Yunis on his way back to the eatery, and suddenly a car driven by an Arab ran him over as well as the soldier beside him. Avigdor received a blow to the head and was instantly killed.
He was 39. He left behind a sister, a brother, a wife and six children: Gilad (13), Tehila (9), Ariel (7), Gavriel (6), Hagit (3) and Yonaton who was 2 months old. The Dehari family continued to live in Gush Katif until the expulsion.